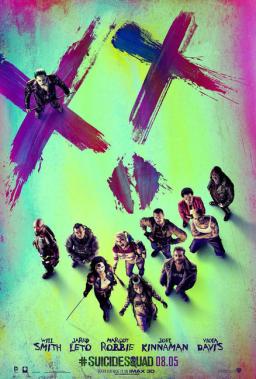 I am a comic book movie fan so I looked forward to DC’s Super Villain comic book movie “Suicide Squad”. It is made up mostly of second-tier bad guys from the DC Universe who are drawn together because of the fear that a future “metahuman” like Superman (now supposedly dead) could choose to use his or her powers for evil instead of good. The driving force is government clandestine operations organizer Amanda Waller (Viola Davis). She proposes to put together a team of Super Villains to fight evil metahumans. The squad she assembles features sharpshooter Deadshot (Will Smith), psychotic Harley Quinn (Margot Robbie), fire starter Diablo (Jay Hernandez), and Aussie thief Boomerang (Jai Courtney). The Joker (Jared Leto) is committed to helping his girlfriend Harley Quinn break free, first from prison then from the Suicide Squad.

Their main threat, however, is a demon named Enchantress (Cara Delevingne) and her demonic brother Incubus (Alain Chanoine) who plan to kill all humanity and take over the world.

Deadshot, Diablo, Waller, and the soldier that Waller tasks to lead the Suicide Squad Rick Flag (Joel Kinnaman) are well-written emotionally layered characters, with credible backstories. The other characters not so much. Humor and jokes work mostly thanks to Smith’s Deadshot who brings a fun swagger to the squad.

The Joker and Harley Quinn, arguably the biggest draws to the movie – are laughable, overblown caricatures that work at first but get tiresome after a while. Harley’s psycho-sexpot act is sexy fun at first but finally is just obnoxious, and the Joker’s insanity is all style and no depth. Leto’s Joker portrayal lacks the ominous, formidable layers that Jack Nicholson and Heath Ledger each brought to their portrayal of the iconic Joker). The evil Enchantress turns humans into grotesque zombie-like faceless creatures whom the Suicide Squad battles while destroying yet another major DC city.  The special effects save the day for this movie that is big on action and small on plot.

For me as a Christian, the demonic activity was the most problematic element of the movie. The Enchantress is a demonic sorceress, who emerges from captivity by means of demonic possession of an innocent woman. The Enchantress and Incubus, her evil demon brother, create a dark and spiritually oppressive atmosphere. Fortunately, the Suicide Squad super villains become “heroes” and their transformation brings a spiritual and idealistic light to shine in the darkness.

Overall the movie was entertaining and a change of pace for DC comic book movies.

One thought on “Suicide Squad – a review”

This site uses Akismet to reduce spam. Learn how your comment data is processed.