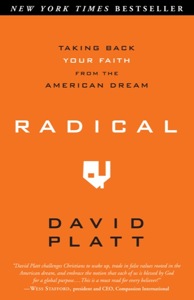 Francis Chan wrote about it in Crazy Love: Overwhelmed by a Relentless God. Both Chan and now David Platt in Radical: Taking Back Your Faith from the American Dream point out that something is amiss in much of the way people who bear the name “Christian” live their lives. Revolution is needed. Radical action is needed. And I agree.

Platt’s Radical is a litany of Christian heroes who went all out for God: William Carey, Elisabeth Elliot, George Mueller, John Wesley, David Brainerd, among others.  And there are also mini biographies of the author’s own congregants and acquaintances who lived radically.  This all shows us what we already knew: that people do manage to live radical lives for Jesus.  This we know.  The problem, however,  is that we’re complacent, disobedient, and seduction-prone followers of Jesus, and some of us know that this ought not be.  Others, don’t mind or care; thus, complacency.  But, what Platt would hope to accomplish with his book is a radicalizing of the reader’s faith that would push him past complacency and into active, unwavering, sacrificial obedience to Jesus.  For me Platt’s book was a significant nudge in the right direction.

Roughly half the book is made up of personal anecdote and well-known Christian tales of heroic faith.  That’s a lot of inspiration in such a small book!  But it’s needed because the problem isn’t that we don’t already know that people live radically. We’ve heard the stories. The problem is that we have a battle within us to do it ourselves, if we’re at least cognizant of Jesus’ demand on our lives.  The problem is we’re just not sure if living radically is for us.  For me. Platt is helpful on this point.  He shows that if we claim to be Jesus’ followers, radical living is for us. It’s what we signed up for and exactly what Jesus demands.   It’s time we read about Jesus in the Scriptures instead of crafting our own that fits well with the American dream.  Platt’s convinced that “we as Christ followers in American churches have embraced values and ideas that are not only unbiblical but that actually contradict the gospel we claim to believe” (p. 3).

In all the personal stories Platt shares, I’m struck by the sheer number of mission trips this man has taken.  It sounds like he has been to every continent.  His “passion for the nations” is evident from the log of places he has visited in the back of the book. Having read When Helping Hurts which shows that short-term mission trips aren’t all they’re packaged to be all these trips were the only part of the book that I didn’t like.

Perhaps the most helpful portion of the book is the concluding chapter in which Platt outlines a plan for radicalizing your faith to leave behind the gospel-opposed cravings of the American dream.  There are five parts to the yearlong “radical experiment.”

These steps are great and I really think anyone who gives this experiment a go will be blessed.  I mean how could you not expect to be a more radical follower of Christ by praying with a global scope, saturating yourself in His word, sacrificing (not just giving), spending time where you normally wouldn’t and planting yourself in a church where disciples are made?  You will grow and be blessed. Oh, by the way, the best part about these steps is that they are exactly what we are commanded to do anyways.  Platt isn’t telling us anything new but he is forcefully reminding us that this is just how we who claim to be Jesus followers are to live.  Radically.

Should you read this book? Only if you want to be challenged!  Reading Radical will help you do what you already know you should do.  Try out Platt’s radical experiment.  The call to radical faith in Jesus is nothing new but it is needed until we DO IT. David Platt is a modern prophet who wants to make sure we realize that God and his gospel are central to what it means to follow Jesus.

This site uses Akismet to reduce spam. Learn how your comment data is processed.

I no longer regularly monitor Facebook and do not answer Facebook messages. I found myself less and less being amazed at all the advantages of being wired in and more and more annoyed by the nasty attitudes displayed over politics. It is my own weakness and problem but one easily fixed. So I'm on Facebook infrequently. If you want to contact me I'll be happy to answer your email to ccfdawg@gmail.com Thanks
Loading Comments...
Comment
×
<span>%d</span> bloggers like this: